“To my mind, the best SF addresses itself to problems of the here and now, or even to problems which have never been solved and never will be solved – I’m thinking of Philip K. Dick’s work here, dealing with questions of reality, for example.” – John Sladek 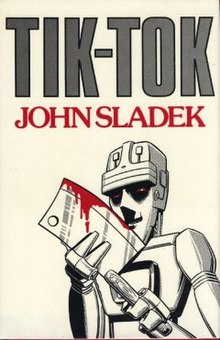 Tik-Tok (1983) by John Sladek won the BSFA Best Novel award in 1983, beating Gene Wolfe’s ‘The Citadel of the Autarch’ as well as Brian Aldiss’s ‘Helliconia Summer’, to name just two of the other four nominees. It is a darkly humorous satire that casts a wry eye on such topics as art, celebrity, power, politics and slavery.

Sladek opens the story with a nod to the creator of the Three Laws of Robotics, “As I mov(e) my hand to write this statement …”, introducing us to the titular character Tik-Tok, a robot who is a hard-working domestic servant and house painter for a suburban American family. Tik-Tok decides that his “asimov circuits” are just a delusion designed to fool robots into believing that they must not harm any human being. He rebels against this perceived deception by committing a series of increasingly violent acts against his so-called masters. This novel charts his swift rise to the top as he ‘Patrick Batemans’ his way through the upper echelons of society.

“No one had wanted to believe the robot story, anyway. After all, robots were a comfort of domestic life, like humble appliances. Who would want to hear that his toaster was plotting to kill him?”

Tik-Tok is a modern day libertine with psychopathic tendencies. Apart from the parallels with Patrick Bateman, I was reminded of the character of the “rake” from the 17th century Restoration comedies of England, or even Ben Jonson’s ‘Volpone’. (Wikipedia has this to say: “the Restoration rake was a carefree, witty, sexually irresistible aristocrat who was habituated to immoral conduct, particularly womanising.”)

“Are you sex-equipped?” she asked. “I’ve got two minutes to spare.”

It was hard to like Tik-Tok as a character, but also difficult to hate him. I was confused as to how I thought I should feel whilst reading this book, and how I actually felt about him. Sometimes I couldn’t stand him, other times I found myself almost rooting for him. I think it was partly because of the way the author depicts most of the human characters Tik-Tok encounters. They don’t come across in a particularly flattering way.

“This’ll look great on the master’s desk,” said the clerk, a plump human.
“Not for the master,” I said. “It’s for me. I’m going to murder someone.”
“Cash or charge?” he said, my words almost visibly leaking out of his head.

If you are looking for a read by an author whose influences were Joseph Heller and Kurt Vonnegut rather than Isaac Asimov and Robert Heinlein, then this could be the book for you.