“The fixed idea of madness is fascinating, if you are inclined toward viewing with interest something that is palpably impossible yet nonetheless exists.” (p.97)

The Transmigration of Timothy Archer is the final novel Philip K. Dick completed before his untimely death in March 1982. Often listed as the third part of the VALIS Trilogy, it bears little relation to the first two VALIS books. (Dick’s intended third part of the trilogy, The Owl in Daylight, never progressed beyond a rough outline.) It is classed as being both a postmodern and philosophical novel which Dick was quoted as saying “is in no way science fiction.” Interestingly, his agent had a different interpretation of the book:

These quotes are taken from an interview the author gave to Twilight Zone magazine at the beginning of 1982. At that time the interviewer remarked that Dick “was in excellent spirits and was looking forward to the premiere of Blade Runner […] with considerable excitement”. It is sad that he didn’t live to see it.

Timothy Archer is a different kind of book to both VALIS and The Divine Invasion. While it still features heavy doses of philosophy and religion, for a Dick novel it is pretty mainstream. It has a contemporary setting, (1980 at the time of its composition), and references to actual events of the time including the death of John Lennon and the lectures given by Alan Watts, (Edgar Barefoot in the book).

“I am the last living person who knew the Bishop Timothy Archer of the Diocese of California, his mistress, his son my husband […]”

In a series of flashbacks, Angel reminisces about her relationships with Bishop Archer and his son Jeff, who we learn is Angel’s husband. We also meet the Bishop’s mistress Kirsten and her schizophrenic son Bill. They are a fascinating group of characters that Dick has written. I quickly found myself caught up in their world, enjoying their quirks as well as their intelligence. To me, they felt more rounded than Dick’s typical characters that people his pulpier works.

If you are a fan of Dick’s science fiction, this book might surprise you with its picture of late 1970s California life and a plot involving religion, the occult, death, the afterlife and the possible origins of Jesus’ teachings. (Phew, take a breath.) Not to mention mind-altering mushrooms! I enjoyed it and found it refreshing after the convoluted strangeness of The Divine Invasion as well as the exegetical dryness of VALIS. This may have been aided by it being the fifth book of twelve in my yearlong PKD + Exegesis group read-a-long.

I’ve commented in earlier reviews about how much I’ve missed PKD’s more mind-bending atypical sci-fi tales such as Ubik and Do Androids Dream of Electric Sheep. Well, this story was something different again, something unexpected. And the good news is there are more books to come! Next up is The 3 Stigmata of Palmer Eldritch.

Definitely recommended, if only to experience the wonderful Angel Archer. 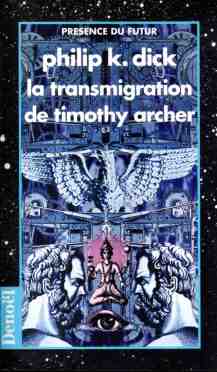 6 thoughts on “The Transmigration of Timothy Archer (1982) by Philip K. Dick”