‘God, as he emerged from the translation tube, had a warm, beatific personality and a wickedly dry sense of humour, but what made his performance – as himself, or Himself, depending on how heretical you were feeling – was the essential otherworldliness he brought to the role, that strange touch of unreality.’ (Loc 154)

Al Ewing is a British writer more widely known for his work in comics. He began writing for the British comic book 2000 AD, and currently writes for a number of publishers including Marvel Comics. He has written titles including Judge Dredd, the New Avengers, and Loki: Agent of Asgard. His debut novel Pax Britannia: El Sombra was published by Abaddon Books in 2007. The Fictional Man is my first experience of his work.

Just suppose that huge breakthroughs in science in the field of cloning were made in the 1970s. It becomes possible to grow fully formed adult beings with preset personalities. However, this advanced technology was purposely limited to creating specific, designed individuals, namely TV and movie characters called “Fictionals”. Thus Indiana Jones, for example, is actually a clone designed and grown by Hollywood complete with his tailor-made personality. When these Fictionals’ TV or movie career is over, they take ordinary jobs in the public and private sector. So you might see James Bond as a doorman or Jane Eyre working in a library.

The Fictional Man is set in L.A. and introduces us to pulp fiction writer Niles Golan. He is best known for his series of “Kurt Power” adventure novels, the latest being “Death by Degrees”. Unfortunately, these books are not well regarded in the literary scene and the reviews are getting progressively worse with each release. In a stroke of good fortune, Niles is hired to write the script for a big budget remake of a camp 1960s spy movie. Seeking inspiration, he begins to research the background of the writer of said movie.

If you like your fiction with added ‘meta’ then this book could be for you. The Fictional Man is a very metafictional story. The author uses his central theme of cloned fictional characters to ask questions about identity as well as exploring what it is that makes somebody “real”. (Definite parallels with Philip K. Dick here.) There are some interesting discussions on this topic between Niles and his therapist, Ralph, who is a Fictional:

Niles also enjoys ‘internally narrating his own life story’, often imagining a much better outcome to the different situations he finds himself in. This leads to some very funny scenes later on in the book as Niles’s narrations become more and more exaggerated. These internal monologues, coupled with his bias against Fictionals, help to reveal Niles’s personality. He is a difficult character to like, but there are parts of him that we will all recognize. It feels like a deliberate choice by the author to make his main character unpleasant. Perhaps it is through his flaws that we come to understand him, almost sympathize with him and his lot.

It is unclear how successful this book has been for Al Ewing. I discovered it thanks to Bookpunks’ enthusiastic review of it here. It is a very entertaining story that is crying out for a wider audience. If you are interested in Philip K. Dick or metafiction, then this could be the book you’re looking for. Recommended! 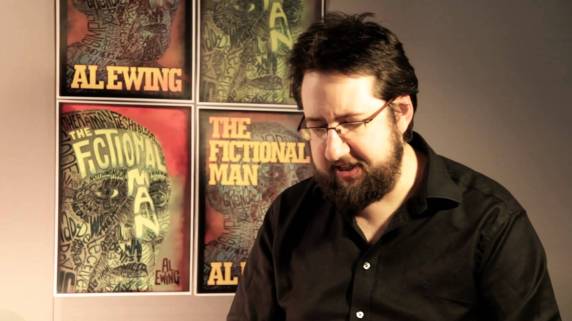