“The moon came out from behind a cloud and lit up their faces. Arika shuddered when she saw the twisted hate that was written there. Ferals. A man and a woman. One carried an axe and the other a pitchfork. She looked quickly behind. More Ferals. A cold shiver ran through her.” (Loc 1297) 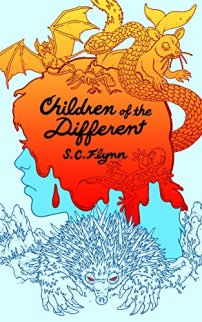 It is nineteen years since a deadly brain disease called “the Great Madness” wiped out the majority of the world’s population. The human race is clinging on to what remains of life, living in sparse settlements dotted around the world, barely surviving. Inexplicably, the children of the survivors begin slipping into a trance at the onset of adolescence. This coma-like state is known as “the Changing.” In this altered state, the child experiences a challenging rite of passage as they journey through the dream-like “Changeland”. When they emerge from the Changing, they either display some kind of preternatural mental power or turn into “cannibalistic Ferals”.

This dystopian tale set in south-western Australia tells the story of twin teenage siblings Arika and her brother Narrah. At the beginning of the book, Arika has just entered her Changing; Narrah has yet to experience his. During her trance, Arika encounters a malevolent “echidna” (had to look that up!) known as “the Anteater”. This creature appears to have the ability to control and shape the landscape of the Changing, and it quickly targets Arika.

Children of the Different is an impressive debut by the author S. C. Flynn. I’ve read and enjoyed good YA books before, and this one reminded me of Chris Beckett’s excellent Dark Eden. I loved the rural Australian setting, especially the Dreamtime-esque “Changeland”. There are some well-realised reality-bending scenes that take place there. The landscape often morphs and reforms into something else; depending on the actions of the character currently interacting with it. The teenage twins are interesting characters that grow with the story, especially as they try to come to terms with their emerging abilities. Some of my favourite scenes involve Arika discovering her new powers and using them.

“She sniffed the air, sticking out her tongue as she did so. Why am I doing that? She wondered for an instant, and then she didn’t care anymore. That was what she did when she sniffed: she tasted the air. Of course she did. It tasted of lots of warm-blooded creatures nearby. […] Her own blood was cool and slow and getting colder and slower all the time.” (Loc 1029)

At times, the mood of the story is fairly bleak and disturbing, particularly when the author is describing the remains of civilization and the cities they used to inhabit. This crosses over into some of the sequences set in the Changing. In one scene early on in the tale, Narrah is lost in a tunnel during one of his trances. He finds himself stepping over the dead bodies of men, women and children who appear to have died in some kind of “frenzy”, no doubt due to the Great Madness. It is a dark and frightening scene, yet I enjoyed this darkness and felt it to be an essential part of the book, helping to enhance the atmosphere.

The author contrasts these darker scenes with the brightness inherent in the relationships between the teenage characters. There is an innocence and purity to the twins deep caring for one another. This can also be seen in their interactions with some of the supporting characters, as well as with the surrounding flora and fauna. The only criticism I have is with the villain. It didn’t feel threatening enough, particularly in the first half of the book. But that is just my opinion.

Overall this was an entertaining read with solid characters, a really good setting, and some nice twists to the plot. Recommended!

[*I received an ARC from the author in exchange for an honest review. This review is my opinion alone.]