“And then the lights go dim. Every day, fifteen hours they’re bright, then nine hours they’re dim. That’s how we know day from night; how we know it’s time to sleep. It’s also how the worst parts of the ship know to come alive.” (Loc 572)

The first part of J.P. Smythe’s Australia trilogy, Way Down Dark, tells the story of Chan, a teenage girl living on board a spaceship called “Australia”. The ship, we are told, left a dying Earth many years before and is searching for a new home for its large crew of “inhabitants”. Over time, the people on Australia have split into four separate groups: the Bells, the Pale Women, the Free People, and the Lows.

Each group lives together in their own segregated zones on the ship. The Bells are descended from genetically engineered soldiers. The Pale Women are a religious group who keep themselves apart from the other groups. Chan is a member of the Free People, the most democratic of the groups; her mother is its leader.  The Lows are brutal fighters who care little for the rest of the crew, and are looking to expand by any means necessary.

“the Lows move down, flooding into the twenty or so floors that the Bells call home, using the darkness to their advantage. And they tear them apart.” (Loc 1601)

This is a dark, gritty coming-of-age tale shot through with moments of violence. Some readers may find it a bit too brutal in parts, especially for a YA title. In the teenage Chan, Smythe has created a strong leading character who is prepared to stand up to the brutal Lows. If this means killing to survive or protect someone, then so be it. Unfortunately for Chan, her actions bring her to the attention of the Low’s new leader, Rex.

Rex, a young woman with battle scars, is another powerful female character. She is a vicious and cunning fighter who at first appears to be a standard one-dimensional villain. But as the story progresses, Smythe provides more depth to her character making for some gripping scenes in the second half of the book.

Although the setting is limited to the spaceship, the world building is very good. Smythe makes the ship feel like a character; dark and dangerous and containing secrets. It matches the brutality of the human characters and creates an atmosphere of constant menace. In some of the scenes where Chan is running for her life through the ship, we get a real feeling of how unreliable her surroundings are. Will she slip or will the ship let her down? The broken stairwells and metal floors offer no soft landings.

As well as the living areas on the ship, there are two places of significant importance to the story: the arboretum and the Pit. The arboretum, perched high up near the top of Australia, is filled with trees and is where the Free People grow their fruit and vegetables. The Pit is at the very bottom of the ship and is where anything unwanted ends up, including the dead. Smythe has written some solid descriptions of this quagmire; a truly disturbing place.

There is a great twist in the story, too, that you may or may not see coming. I didn’t, and was surprised by it. It’s been a while since a book did this to me, and the author shapes it well. Plus, the story ends on a real cliffhanger, encouraging the reader to buy the next book in the trilogy: Long Dark Dusk. Curse you, Smythe! You’ve left me hungry for more. 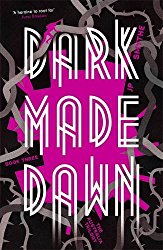 This book has been written off in some of its reviews but I really enjoyed it. It is dark and some of the action scenes are ruthlessly violent. But I really got to like the character of Chan and was rooting for her once the story got going. After a slow start, Way Down Dark turned into a real page-turner. Recommended!