‘This war is the Change War, a war of time travelers–in fact, our private name for being in this war is being on the Big Time.’

Fritz Leiber’s Hugo Best Novel winner The Big Time is sixty years old. Have you heard of it? I’ve had this on my TBR list for a couple of years and was inspired to read it by the Little Red Reviewer. She holds a Vintage Science Fiction Month reading event every January, and this was my choice for it.

One of the questions she has asked Vintage SF Month participants is: “Why did you choose to read a vintage title?” It’s an important question. I was looking through my reviews from last year and was shocked to find that I had only read two SF titles written before 1980: The Dispossessed and The Ginger Star. Apart from simply wanting to read more vintage titles this year, I want to see how well these stories stand up today. Vintage SF can offer readers a window into the past but it’s fair to say that they often age poorly. When we read them with modern eyes, we need to be aware of the time period they were conceived in. 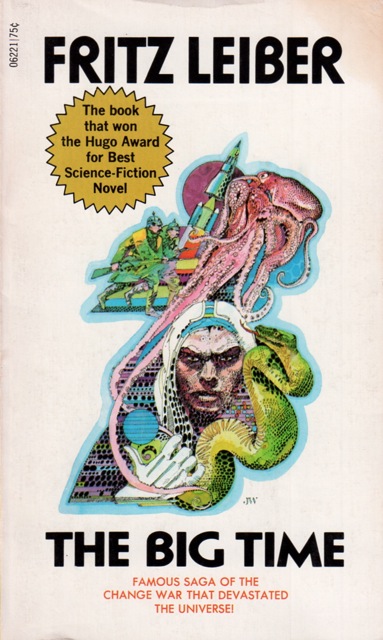 The Big Time is a short book. It’s written in the first person and narrated by Greta, an Entertainer who works in The Place. The Place acts as a kind of rest-stop for the soldiers fighting in the Change War. They go there to spend some relaxation time and briefly escape from the never-ending war. The Entertainers offer release and recuperation through various means including sex, music and booze. They also act as nurses, therapists, and surrogate mothers/sisters if needed.

‘Entertainment is our business and we give them a bang-up time and send them staggering happily back into action,’

The Change War has been going on for as long as anyone can remember. Soldiers are taken from any and all time periods, thus you might have a warrior from Ancient Rome fighting alongside a British soldier from the First World War. These soldiers are given the option to be removed from their original timelines when facing certain death. If they agree, they must join the Change War and fight for either the Spiders or the Snakes. Greta’s sympathies appear to lie with the Spiders though it is never made clear exactly who the two factions are or who is controlling them.

“Spiders and Snakes. What are our masters, that we give them names like that?”

It should be noted that The Big Time reads more like a stage play than a story. It has only one setting and contains a cast of characters who spend a lot of time talking. Aside from our narrator Greta, there are two other female Entertainers: Maud and Lili. Sid seems to be in charge of The Place. He enjoys speaking in verse and using language from Shakespeare’s time. Doc is an alcoholic medical officer who frequently lapses into Russian when he’s not falling off barstools. And Beau is from the American South.

What plot there is comes with the arrival of three war-weary soldiers in search of some R&R. They are an intriguing mix of characters comprising a WWII Nazi, an English poet from WWI, and a Roman Legionnaire. (You can probably guess where the friction will lie.) Further on in the narrative, they are joined by two aliens and a female warrior from ancient Crete. Leiber has fun with this motley cast of characters, especially their interactions and monologues.

“I was more alive than I had been before, but it was the kind of life a corpse might get from unending electrical shocks and I couldn’t summon any purpose or hope.”

Add to this the threat of a ticking nuclear bomb and a second half which turns into a smart locked-room mystery and you have The Big Time. It’s different. It’s fun. It’s a little bit bonkers. I haven’t read many books from the 1950s but this one stands out. It demands your attention while reading it and will probably reward a second reading. 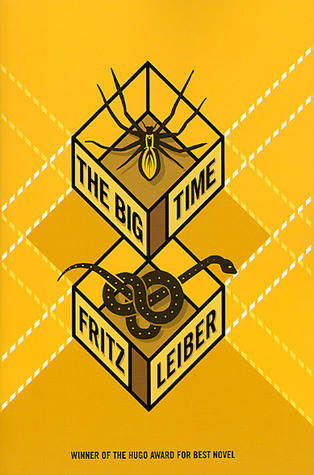