On a recent trip over to England I found these three gems in a second-hand book store. The shop was “Empire Exchange” in Manchester. It was the first time in years that I had explored the shelves of a “proper” second-hand store. I paid an unbelievable five pounds for all three books, (about $6.50).

From the back cover: ‘Once again Harry Harrison has collected a dazzling line-up of talent for the second of his exciting NOVA collections. Established writers and new talent rub shoulders, their common ground a brilliant talent for sf.’

Includes the short stories: ZIRN LEFT UNGUARDED, THE JENGHIK PALACE IN FLAMES, JON WESTERLY DEAD by Robert Sheckley; EAST WIND, WEST WIND by Frank M. Robinson; THE SUMERIAN OATH by Philip Jose Farmer; NOW + n NOW- by Robert Silverberg; TWO ODYSSEYS INTO THE CENTER by Barry Malzberg; DARKNESS by Andre Carneiro; ON THE WHEEL by Damon Knight; MISS OMEGA RAVEN by Naomi Mitchison; THE POET IN THE HOLOGRAM IN THE MIDDLE OF PRIME TIME by Ed Bryant; THE OLD FOLKS by James E. Gunn; THE STEAM-DRIVEN BOAT by John Sladek; I TELL YOU, IT’S TRUE by Poul Anderson; AND I HAVE COME UPON THIS PLACE BY LOST WAYS by James Tiptree Jr.; THE ERGOT SHOW by Brian Aldiss 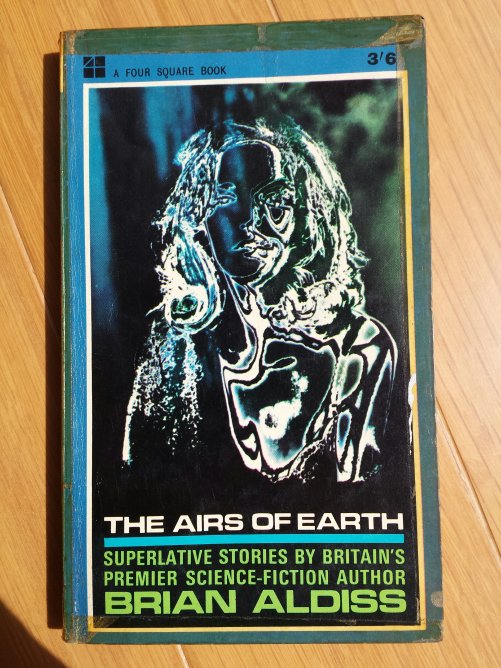 From the back cover: ‘8 imaginative excursions into the future of Man and Earth. Meet Man of the future with a restless urge to explore that can never be satisfied; learn what makes the soldier; or see Britain’s answer to the Cold War situation.

How will the mind react in a non-human body? Would universal laughter save the world?’

In this volume: A KIND OF ARTISTRY; HOW TO BE A SOLDIER; BASIS FOR NEGOTIATION; SHARDS; ‘O MOON OF MY DELIGHT!’; THE INTERNATIONAL SMILE; THE GAME OF GOD; OLD HUNDREDTH 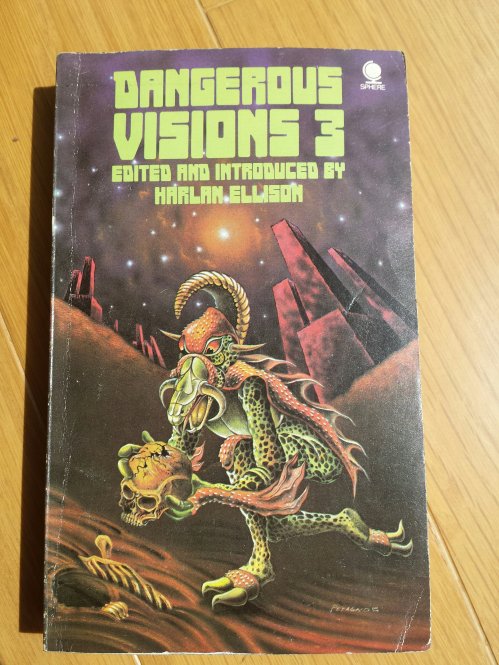 The original DANGEROUS VISIONS anthology was split into three parts for paperback publication. I will have to try and find parts 1 and 2 in the future.

From the back cover: “A gigantic, shapeless, exuberant, and startling collection … vital, meaningful stories” -Damon Knight.

… and they are, put together in one of the finest collections to be found in modern SF, a dazzling gathering of brilliant talents that will stun, startle and–above all–entertain.

DANGEROUS VISIONS is a landmark in SF. In this volume: IF ALL MEN WERE BROTHERS, WOULD YOU LET ONE MARRY YOUR SISTER? by Theodore Sturgeon; WHAT HAPPENED TO AUGUSTE CLAROT? by Larry Eisenberg; ERSATZ by Henry Slesar; GO, GO, GO, SAID THE BIRD by Sonya Dorman; THE HAPPY BREED by John T. Sladek; ENCOUNTER WITH A HICK by Jonathan Brand; FROM THE GOVERNMENT PRINTING OFFICE by Kris Neville; LAND OF THE GREAT HORSES by R.A. Lafferty; THE RECOGNITION by J.G. Ballard; JUDAS by John Brunner; TEST TO DESTRUCTION by Keith Laumer; CARCINOMA ANGELS by Norman Spinrad; AUTO-DA-FE by Roger Zelazny; AYE, AND GOMORRAH … by Samuel R. Delany

Have you read any of these books? Comments welcome below.