“Gray Matter” first appeared in the magazine Cavalier in October 1973. It’s taken from Stephen King’s first collection, Night Shift (1978), which contains twenty of his earliest short stories. These stories were originally published between 1970 and 1977. This collection includes Children of the Corn, Quitters Inc., The Lawnmower Man, Trucks, The Ledge, Jerusalem’s Lot, and more.

My Summary & Thoughts on “Gray Matter”

A young boy runs into a 24-hour convenience store during a heavy snowstorm. He looks terrified and asks the owner, Henry, to sell him a case of beer for his father. Henry and the two locals in the store know the boy well. He is Richie Grenadine’s son Timmy, and his father often sends him to buy his beer, making sure it’s the cheapest beer in the store. Richie used to come and buy it himself until fairly recently.

END_OF_DOCUMENT_TOKEN_TO_BE_REPLACED

‘And a helm was on his head; a black helm, with a dragon’s head craning over the peak, and dragon’s wings flaring backward above it, and a dragon’s tail curling down the back.’

Yes, I’m very late to the tales of Elric VIII, 428th Emperor of Melniboné. His first appearance was in a novelette titled “The Dreaming City” which was published in the British magazine Science Fantasy in 1961. Since then, Moorcock’s most famous creation has featured in a wide range of stories including short stories, novels, comic books and graphic novels. The publisher Gollancz republished all of Moorcock’s Elric back catalogue over seven volumes from 2013–15. This is the first volume and serves as an introduction to the character.

END_OF_DOCUMENT_TOKEN_TO_BE_REPLACED

As a way of getting into writing again, I’m going to post 10 albums that have had a big influence on me throughout my life. This is currently popular on facebook. One of the rules on facebook is “no explanations.” So I thought I would bring the explanations over here and share a little on why I have made each selection. 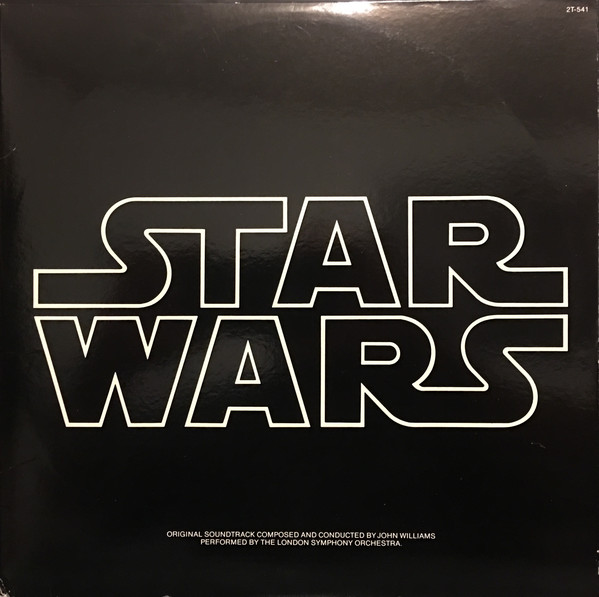 I can’t remember clearly if the first time I watched Star Wars (1977) was on TV or on my friend’s pirate video copy. This would be in either 1981 or 1982. We went through a phase of watching it every weekend at his house. So much so that I can still quote most of the dialog from the movie all these years later. The same friend also had a copy of the soundtrack on double vinyl and we used to listen to it at his house after school. END_OF_DOCUMENT_TOKEN_TO_BE_REPLACED

“You mean I’ll live forever?” The thought was almost too great for him to grasp. Words in his mind became fleeting pictures of a hillside covered with long, sweet grass. A hillside smiling in the sun. Day always. No night ever.

I read the first one last year and really enjoyed it. I haven’t read the second one yet. I’ve just finished reading the third one for my Short Story Tarot Challenge.

‘Whenever you talk, Meyer, I begin to think of a certain tone of green.’

‘Holofilms’, ‘transport units’, ergot, references to Mars, Shakespeare, and Coleridge, Brian Aldiss’s THE ERGOT SHOW is a bit of a wild ride. It reads like a 1960s art-house film script if written by someone under the influence of something strong. Is this what is often labelled New Wave science fiction? It does feel experimental and artistic. I’m not familiar with the movement so please feel free to correct me in the comments below. 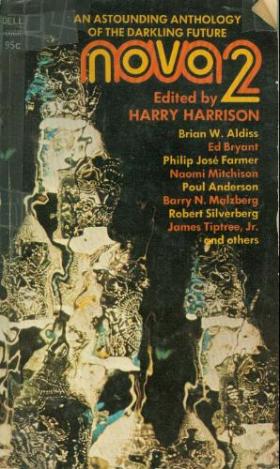 The story features two film directors, Pagolini and Rhodes. One is filming the other’s film being made. They attend a party and talk about the ‘holofilm’ industry. This is interspersed with descriptions of various locations and brief scenes featuring some background characters. The effects of consuming ergot fungi plays a small part in the narrative. END_OF_DOCUMENT_TOKEN_TO_BE_REPLACED

‘If we remove him from the past, we have to make sure no one notices the big jagged hole in history we’ll leave.’

I reviewed John Sladek’s 1983 BSFA-winning novel Tik-Tok back in December 2015. I enjoyed the story, describing it as “a darkly humorous satire that casts a wry eye on such topics as art, celebrity, power, politics and slavery.” THE STEAM-DRIVEN BOY is a humourous short story that pokes fun at Asimov’s “Robot” novels. It’s another story taken from the fine 1972 collection Nova 2. 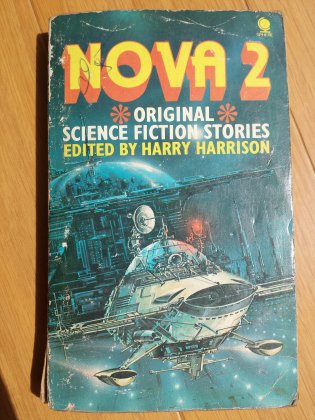 ‘I opened eyes and saw him, the God-man with the special food.’

When I was researching this short story by Naomi Mitchison, I remembered where I’d heard the author’s name before. Her 1962 novel Memoirs of a Spacewoman is on a list I made of female authors to read. It was recommended to me by a fellow blogger but I wasn’t able to find a copy. (Bart over at Weighing a Pig Doesn’t Fatten It has a thoughtful review of Memoirs here if you are interested.)

Mitchison’s short story “Miss Omega Raven” was published in Nova 2 (1972), as well as the Terry Carr edited The Best Science Fiction of the Year #2 (1973). It’s a very short story clocking in at only six pages. In his brief introduction to Mitchison’s story, Harry Harrison described it thus:

‘this deeply understanding story of a completely different type of mutation.’

END_OF_DOCUMENT_TOKEN_TO_BE_REPLACED

“That’s right, friends! Imagine yourself the star of your own show in your own home! All you need is the fantastic new Twenty-Twenty holovision plan, available only from UniCom.”

I read this short story in Nova 2 (1972) edited by Harry Harrison. I will be working my way through this anthology as part of my Short Story Tarot Challenge.

Brief Summary
Ransom is a struggling poet who makes a living writing ‘holovision’ shows for a huge corporation. He lives in a ‘labyrinthian apartment block’ in a polluted city where windows ‘stay permanently shut.’ He hates writing scripts for UniCom and is hatching a plan to break free from its soulless grip. END_OF_DOCUMENT_TOKEN_TO_BE_REPLACED

‘I want to leave a record of what has happened to me, so that if someone comes for me, and finds me dead, he will understand.’

TRACKING SONG by Gene Wolfe was originally published in 1975. It first appeared in the anthology In the Wake of Man, which also featured stories by R.A. Lafferty and Walter F. Moudy. The story’s next appearance was in Wolfe’s own collection The Island of Doctor Death and Other Stories and Other Stories (1980). It is 70 pages long. (You can find it here in issue #90 of Lightspeed Magazine.)

Brief Summary
The protagonist of the story has lost his memory and his way. He wakes up in a wintry landscape after being found by a local tribe of animal-like humanoids. He cannot remember his own name nor where he is from. The tribe members call him “Cutthroat” due to a birthmark on his neck. They tell him they discovered his unconscious body in the snow after the ‘Great Sleigh’ had passed. What the Great Sleigh is, he also can’t recall. Cutthroat sets off on a journey to find the Great Sleigh, seeking answers to who he is and where he came from. END_OF_DOCUMENT_TOKEN_TO_BE_REPLACED

‘Call me Shang-Chi, as my father did, when he raised me and molded my mind and my body in the vacuum of his Honan, China, retreat. I learned many things from my father: that my name means “The Rising and Advancing of a Spirit,” that my body could be forged into a living weapon through the discipline of Kung Fu, and that it might be used for the murder of a man called Dr. Petrie.

Since then, I have learned that my father is Dr. Fu Manchu, the most insidiously evil man on earth … and that to honor him would bring nothing but dishonor to the spirit of my name.’

Riding on the wave of the Bruce Lee-inspired Kung Fu craze in the 1970s, Marvel Comics launched the character Shang-Chi, Master of Kung Fu in 1973. He was created by writer Steve Englehart and artist Jim Starlin and made his first appearance in Special Marvel Edition #15, cover-dated December 1973. He appeared again in issue #16, and with issue #17 (April 1974) the title changed its name to The Hands of Shang-Chi: Master of Kung Fu. The series was a success and continued for ten years until the final issue #125, dated June 1983. END_OF_DOCUMENT_TOKEN_TO_BE_REPLACED