‘Pete looked around him at the river, the wooded banks. He realised he didn’t know this stretch of water at all. […] “GPS has gone down,” he said.
Hannelore just grinned and shook her head. “Nah, it’s okay, Captain,” she said. “I know the way. I’ll show you.”‘

In Tallinn, Alice – a junior Scottish diplomat – is drawn into an incomprehensible plot spanning decades. In the Aegean, young refugee Benno makes a desperate break for freedom and finds himself in a strange new life.

On the canals of England, a fleet of narrow boats is gathering. Rudi, now a seasoned Coureur, finds himself drawn away from the kitchen one last time as he sets out with his ally Rupert in pursuit of a dead man.

This book is the fourth and–probably–final entry in Dave Hutchinson’s “Fractured Europe” series. It’s difficult to write a summary of the novel because there is so much going on in here. As this book is the fourth in a series, it features characters and plot threads from each of the previous books as well as some new characters. Therefore, if you are new to this series, do not start here. END_OF_DOCUMENT_TOKEN_TO_BE_REPLACED

Imagine a train line which grew out of a pocket universe and spread across a fractured Europe. Now imagine this “Line” being its own state with borders and so on. Are you still with me?

‘The Line had been decades in the building. It had originally aspired to being a straight line drawn across Europe and Asia, […] Geography and simple pragmatism meant that this was never achievable,’

The third book in Dave Hutchinson’s Fractured Europe series, Europe in Winter continues the adventures of Rudi, ‘the former chef-turned-spy.’ It begins with a deadly terrorist attack on a train and ends with a staggering “sleight of hand” at a major international airport. In between, the author takes us on a snaking journey around Eastern Europe as we meet a motley cast of characters who could be working for any side. Confused yet? You will be! END_OF_DOCUMENT_TOKEN_TO_BE_REPLACED

“What if I were to offer you a way off this howling nightmare of a planet? Right now?”
“You have some kind of magic spaceship that takes off through seven-hundred-kilometer-an-hour blizzards?”
She wrinkled her nose and grinned coquettishly. “Oh, I have something better than that.” (Loc 219) 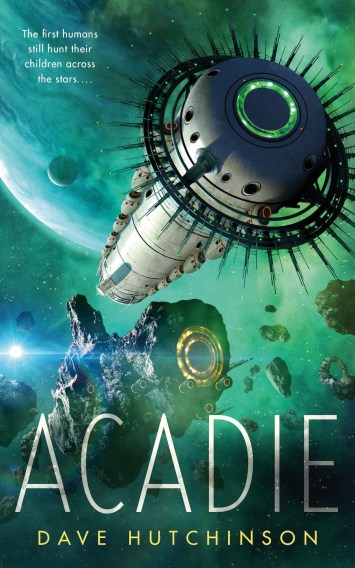 Back cover blurb: “The first humans still hunt their children across the stars.

The Colony left Earth to find utopia, a home on a new planet where their leader could fully explore their genetic potential, unfettered by their homeworld’s restrictions. They settled a new paradise, and have been evolving and adapting for centuries. Earth has other plans.

The original humans have been tracking their descendants across the stars, bent on their annihilation. They won’t stop until the new humans have been destroyed, their experimentation wiped out of the human gene pool.

Can’t anyone let go of a grudge anymore?”

John Wayne “Duke” Faraday, president of “the Colony”, is recovering from his 150th birthday celebrations when he is rudely awakened. An unidentified probe has been picked up on the scanners; a probe which could be from Earth. This is not good news for the Colony as they have no intention of being found. Will they shoot first and ask questions later? Or is the probe’s technology too valuable to simply destroy?

Part of Tor’s “Summer of Space Opera”, Dave Hutchinson’s new novella “Acadie” explores themes including genetic modification, artificial intelligence, and the colonization of new worlds. Being a Dave Hutchinson story, it is replete with crisp, flowing dialogue and a biting sense of humour. END_OF_DOCUMENT_TOKEN_TO_BE_REPLACED

“I still wasn’t sure whether England was in Europe or not; I had the impression that the English would have quite liked to be in Europe so long as they were running it, but weren’t particularly bothered otherwise.” (Loc 4053)

This is the second book in the Fractured Europe series. The first book, Europe in Autumn, is a terrific read. I was led to it by blogger friends; one of the great things about the book blogosphere. It reads like a cold war spy thriller set in a near-future Europe filled with weapons that could’ve dropped out of a William Gibson Sprawl story. It’s also a very smart book that is peppered with moments of dry humor as well as containing some wonderful descriptions of food.

Europe at Midnight is not a direct sequel to Autumn; it can be read as a standalone story. But if you have read the first Europe book, Midnight will expand your understanding of it. It will also provide background to some of the events and places mentioned in Autumn. This was a bold move by Hutchinson, as he could easily have written a second book that picked up where the first one left off, continuing the adventures of Rudi the chef. Instead, he has opted for originality by broadening his fragmented Europe universe and bringing in new characters. END_OF_DOCUMENT_TOKEN_TO_BE_REPLACED

Happy New Year to everyone! Here’s to another year of reading and (hopefully) blogging.

I enjoyed a great trip back to Manchester, England to visit my dad. The return journey to Japan took longer than expected due to delayed flights and a rather surreal transit in Beijing airport. But I made it home with bags and senses in one piece. Just.

I tried my hardest NOT to buy more books over in the UK but as you can see from the picture above, I failed. Only four, right? That’s what I keep telling myself. At least I didn’t have to post any over this time. END_OF_DOCUMENT_TOKEN_TO_BE_REPLACED

He heard glass crunch, behind him. He turned and saw a dark figure detach itself from the shadows of the doorway opposite. By the light from his phone he saw that it was wearing tight-fitting clothing and carrying what appeared to be a pistol with a very long barrel.

I hadn’t heard of the author Dave Hutchinson before this book. He describes himself on his blog as “A journalist, once upon a time. A science fiction writer, occasionally. Will write for food. Or even the odd kind word.” [Link to his homepage.]

Fortunately for me, Europe in Autumn was recommended by some fellow bloggers who had been singing its praises on their ‘Best Books of 2014’ posts. It’s a great story full of some brilliant ideas and well-realised characters. It reads a bit like a cold-war spy thriller which has had some of its technology amped up to an innovative level. The atmosphere is one of intrigue and espionage, trust and betrayal, and its setting is a fragmented, near-future Europe split by ever-increasing numbers of borders. It tells Rudi’s story.