“I’m not so sure he’s mad, Father. Just a little devious in his sanity.”

Published in 1959, ‘A Canticle for Leibowitz’ won the 1961 Hugo Award for Best Science Fiction novel. It has since been described as “the first major post-holocaust SF novel.” It is the only novel its author Walter M. Miller, Jr released in his lifetime. The sequel, ‘Saint Leibowitz and the Wild Horse Woman’, was completed by the author Terry Bisson and published posthumously in 1997. 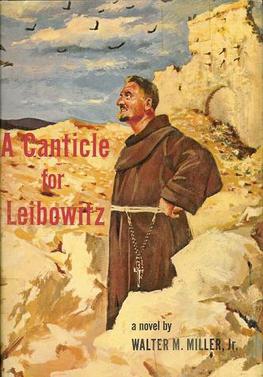 I’d never heard of it until a fellow blogger recommended it to me via the wonderful Worlds Without End website. It is a novel made up of 3 novellas which Miller originally released individually. Each novella focuses on a different period in the future after there has been a planet-wide nuclear holocaust. The story is told from the point of view of an order of monks whose task is to preserve any surviving texts or “memorabilia” from before the war. END_OF_DOCUMENT_TOKEN_TO_BE_REPLACED